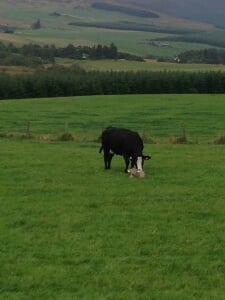 I didn’t exactly plan it this way, but earlier this month I (and fellow RealAgriculture.com writer Debra Murphy, among others) found myself in Scotland, as the country was gearing up for what may be the biggest modern-era step it ever takes – that is, the September 18 referendum for independence.

The timing with the referendum was coincidental. Debra and I were in Scotland as part of a conference of international agricultural journalists, which meets in one of its 33 member countries annually. A gathering there had long been in the works, to show international journalists the various farming areas of northeast Scotland, around Aberdeen. Some people are surprised to think that agricultural journalists actually have an organization, let alone one that’s global, and draws upwards of 200 journalists to its annual congress. But it’s true – the International Federation of Agricultural Journalists has been around since 1956, and the Canadian Farm Writers Federation is a long-standing and active member.

There’s some irony in the fact the Scottish congress was hosted by the British Guild of Agricultural Journalists, of which agricultural journalists in Scotland are members…at least, for now. The guild members did a tremendous job of working together for a united congress. You would never know the possibility of separation was on their minds.

But the British-Scottish guild connection is only one of the many ironies, tragedies and question marks that arise as Scotland ponders its present and its future.

As Canadians, we’ve had a dizzying amount of exposure to separation in a relatively brief time – brief, at least, compared to the long history of Scotland.

For example, my brother John, a former book editor, and I were in Montreal in May of 1980, on the eve of Quebec’s first referendum. His company was collaborating with a journalist there on a what’s-next book that would be published in the event of a yes vote (the referendum was defeated). Then during the October 1995 referendum, I was writing agricultural stories for Alberta Report,  knowing my home province at the time, with its many extreme views and firebrand leaders (including Alberta Report publisher Ted Byfield) might well be next to consider leaving Canada if Quebec voted to go. Thankfully, neither did.

In Scotland, I was asked often as a Canadian about my thinking on the referendum. I repeatedly said I was glad, for so many reasons, the separation culture has died down. But I know there are still many thousands of people in Quebec – maybe in Alberta, too — who would prefer to be independent. And Scotland is in the same situation. Even if the NO side wins, there will be oodles of discontented Scots.

Separation ebbs and flows, but from what I can tell, even after the hammering the separatist party in Quebec took in the last provincial election there, it always smoulders.

Separatists must consider the consequences of their actions. Lately, a quote from back in the 1950s from Ezra Taft Benson, United States Secretary of Agriculture for both of the administrations of President Dwight D. Eisenhower, has gained popularity on social media. It seems applicable to the Scottish referendum.

“You are free to choose,” he said, “but you are not free to alter the consequences of your decision.”

Indeed. Consider separation from an agricultural angle only (which is tough, given how farming permeates so much of society). None of the farmers I visited with in northeast Scotland volunteered to talk about separation. When prodded, though, one who farmed in the shadow of the Glenlivet distillery, was clearly ready for his country to go it alone.

“We get screwed by London,” he scowled, referring to what he sees as an imbalance in UK support for Scottish agriculture versus British agriculture. “Farming would be better off if we were separate.”

Of course, a lot of Brits feel the opposite, thinking Scotland gets more than it deserves.

But this farmer also stands by and watches with little opportunity to intervene, as the profits from the 58,000-acre Glenlivet crown estate, about $500 million a year, are what’s called “surrendered” to the reigning monarch, supposedly for the good of the UK.

You can understand why Scots would want to keep that money.

Still, huge questions arise in the face of separation. How can crown estates, like the one at Glenlivet, continue to operate in a country that no longer accepts British rule? What happens to the 30 farms within the estate? And a bigger question yet for agriculture: What happens to support from the European Union for Scottish agriculture?

And none of this discussion even touches on oil profits from the North Sea.

When I arrived in Scotland, I asked an Aberdeen cab driver his thoughts on the referendum.

Next week, though, will that be foreign currency?