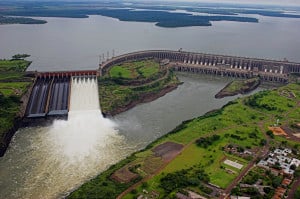 Iguassu (or Iguazu, Iguacu) Falls borders Argentina and Brazil, its name originating from the Tupi or Guarani language meaning “big water.” With a width of 2.7 kilometers and heights between 60 and 82m, it certainly is big water. They’re taller than Niagara Falls and twice as wide. And it’s not just the falls that are uniquely spectacular. The surrounding subtropical rainforest is home to over 2000 species of vascular plants, 400 bird species, wild cats and rare animals like the Giant Anteater and the broad-snouted Caiman.

And only roughly 40km away, touched by the labour of 20 years and 40 000 people, is the Itaipu Dam, said to house an extraordinarily efficient power plant, the largest in terms of energy production in the world (though China’s Three Gorges is 60% larger). The project’s negotiations started in the ’60s between Brazil and Paraguay. Construction began in 1974 and Itaipu started generating electricity in May, 1984. By 2023, the structure is expected to be paid off. It now supplies 17.% and 72.5% of the energy demanded in Brazil and Paraguay, respectively. In 2013, Itaipu power plant generated 98,630,035 megawatts-hour: a new world record for energy production.

Our fifth and final adventure in Brazil with Rob Saik, host of Agri-Treks and founder of Agri-Trend, takes us to two of Brazil’s most renowned sites, in a vlog inspired by water, energy and agriculture.