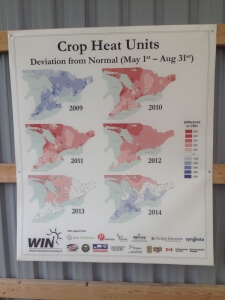 The 2014 Ontario corn crop went in the ground over the course of nearly six weeks — a hardly ideal scenario. While some lucky farmers in the far south were planting before May, most didn’t have the opportunity until mid-May and still more long after that. Coupled with a cooler than average summer, and farmers are understandably nervous about this crop getting to black layer.

Real Agriculture’s Bernard Tobin caught up with three agronomists at Canada’s Outdoor Farm Show last week to look at the state of the corn crop and get a recap of how far off maturity may be in their area, what disease pressure is like, and some good news for a change. In this video, hear from Aaron Bowman, with PRIDE Seeds, Shawn Brenneman, of Syngenta Canada, and Bob Thirlwall, of DEKALB, about the yield potential and risk of an early frost to this corn crop.