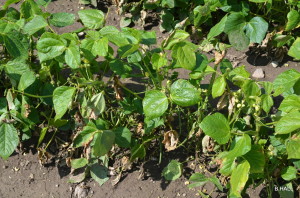 UPDATE: Brian Hall, of OMAFRA, says lab test confirms the primary disease is bacterial brown spot, a disease that has never been found in Ontario before. It is affecting azuki beans only, so far. The disease is also being reported in Colorado, Nebraska and Michigan.

@realag_lyndsey all adzukus that have scouted in east central #ontag have symptoms. Some less freq and severe than others, some devastating

“(It’s) been a good year for blight in quite a few crops. We are seeing quite a bit of common bacterial and halo blight in some fields of dry beans. It is seed-borne so quite a bit of differences between fields,” he says.

While blights are seen every year, early infections, like those during pod fill which is the case this year, can be very destructive. Bacterial blight spreads from leaves to stems and pods and can cause seed staining increasing the amount of pick beans, Hall says.

Unfortunately, there is little growers can do to control this disease other than stay out of fields when wet. The cool to moderate temperatures combined with rain and storm events have triggered the rapid and wide spread of this highly mobile epiphyte/aerosol throughout legume regions, Hall says. The blight appears to have a short incubation period of 7 to 10 days, which can lead to “unexpected” explosions of the disease in presumably healthy fields that were scouted a week prior to the sudden outbreak.

Because it’s a bacteria infection, fungicides are useless in the control of the disease. Only copper-based fungicides have activity and work best when applied early as a preventative measure, Hall says, and repeated applications are often required.

“Azuki beans are being particularly hard hit by disease this year. We have not fully determined what is causing the disease and decline we are seeing in some fields, but not all fields are affected,” Hall says. The University of Guelph diagnostics lab is currently completing DNA scanning and plating, but the likely culprit is Pseudomonas which can cause a few different types of blight, he says.

“We are hoping to isolate exact strain so we can develop management strategy going forward. Infected fields that were otherwise healthy and showing good yield potential have declined significantly in the past one-and-a-half weeks,” Hall says. “Once we have confirmation on the exact pathogen we will be able to develop a management strategy for the future.”