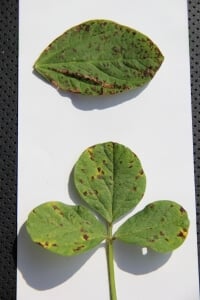 Can you tell herbicide injury from tan spot? (If only you could flip the leaves)

Soybean growers in Manitoba are — so far — rather lucky. While there are diseases in the province that infect soybeans, like downy mildew, white mold (sclerotinia) and brown spot, overall pressure is relatively low. That will change over time, however, as Vikram Bisht, plant pathologist with Manitoba Agriculture, Food and Rural Development, points out, which means scouting and properly identifying diseases on the soybean crop now is still worth your time, even if a fungicide application is not. 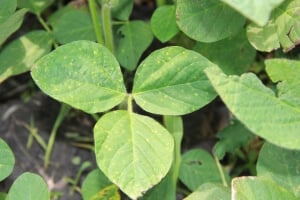 Related: Take a look at the insect and disease scouting calendar for Western Canadian soybeans

When it comes to soybeans, there are several leaf diseases of concern. The tricky part is that herbicide injury can also look alarmingly like one of them, plus one disease is caused by a bacteria, rendering fungicides useless. In this Soybean School West episode, Bisht shows us the difference between brown spot and herbicide injury, what downy mildew looks like early on and highlights the tell-tale signs of bacterial blight.