It’s hard to think of cutting crops when we haven’t finished shoveling the seeders out of snowbanks, but boy is it nice to imagine sitting in this harvester in the sunshine. Meet the Jaguar 960, from Claas. This harvester runs with at 653 hp, with a large cooling system in the centre and a Tier 4 compliant V8 Mercedes engine in the back. 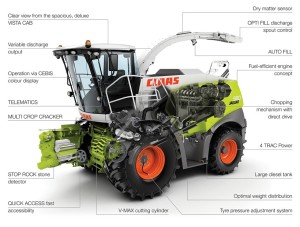 At the top, the 960 — like its other 900 series counterparts, ranging from 456 to 884 horsepower ‚ — measures dry matter flow continuously, with an option to record yield along the way. Moving to the middle, the drive to the chopping unit is direct, and thus highly efficient. The cab is not only spacious; it’s comfortable. Oh, and there’s a cooling box under the passenger seat.

To the front: pre-compression rollers can open up to 7 inches (or 180mm), five magnets and an optional stone detector protect the machine from large throughputs and foreign objects.

But, what better way to learn about equipment than to see it? In this video, David Wilbert of Claas gives a tour of the Jaguar 960, describing its key characteristics and efficiencies. Oh hey, and did you know Claas intends to release four new 800 series forage harvesters? That, and more, in the video below.

Check out all of RealAgriculture’s coverage of the 2014 National Farm Machinery Show.