By most accounts the 2010 NCBA convention in San Antonio was a huge success.  This was my first NCBA meeting so it is fitting that we talked to Anne Dunford a wily veteran of the NCBA festivities.  Anne wrapped up the week and talked about what she thought were the major things to be pulled out the convention week.  There was a lot of talk about the potential for increased US beef exports due to the lower US dollar, affects of country of origin labelling, the change to the NCBA membership fee structure, and the potential for a recovery for the US economy. 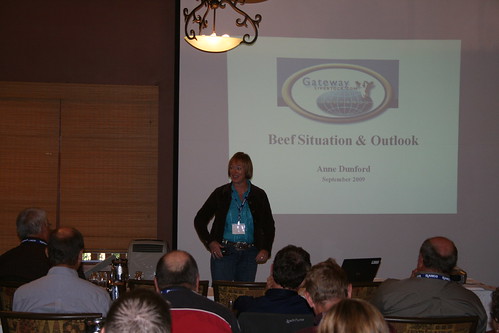 After being at the NCBA I would have to say that the US cattlemen seem more optimistic than in Canada.  There seemed to be a feeling of “the worst is behind us” for the US cattle ranchers and feeders.  The reality is that if the recession doesn’t contract resulting in increased US exports and a US domestic increase in middle meat demand, the US cattlemen will have nothing to brag about financially in comparison to his Canadian peers.

Let us know what you think.  Are you optimistic whether you are in Canada or the Unites States?  Do you think that the worst is behind the industry?

This was great to talk to Anne while at the convention and get a chance to tape a Beef Market Update segment live at the NCBA convention.